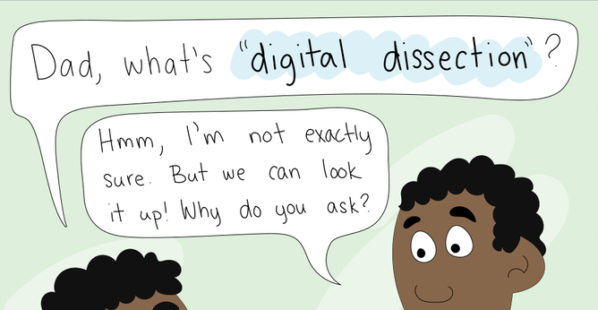 Kind kids come in all shapes and sizes, but there’s one thing they all have in common: No matter what they want to be when they grow up, they’ll likely follow their hearts. Many end up picking a job that lets them speak up for animals!

Here are 12 career ideas to think about if you want to help animals when you get older:

You could create stylish looks and still have a ♥ for animals by studying to be a fashion designer. Compassionate fashionistas and stylists know it’s never trendy to wear or make clothing from animal parts, because they know that no one should suffer for fashion. They don’t use wool, leather, fur, or anything else that comes from an animal.

For example, Leanne Mai-ly Hilgart believes that “being cruel isn’t cool,” so she decided to start her own animal-free fashion line, Vaute Couture. In February 2013, her label became the first all-vegan clothing line to show at New York Fashion Week. If you dream big and stay kind, someday you could become a cruelty-free fashion designer like Leanne.

Unfortunately, not everyone treats animals with the love and respect that they deserve. Some people leave their dogs chained outside with no food, water, or shelter from the harsh weather. But you know that all dogs and cats belong indoors, and as a veterinarian, you’d always make sure your four-legged patients are happy and healthy.

Every year, more than 6 million animals enter shelters. As a veterinarian, you could help by spaying and neutering dogs and cats.

Do you like standing up for those in need? Lawyers are sort of like superheroes—but instead of wearing a cape, they usually wear a suit.

Animals sometimes need someone to stick up for them in court. For example, if a roadside zoo weren’t taking good care of animals, you could advocate for them as a lawyer. Lawyers help make sure any people or companies doing illegal and cruel things to animals get fined or taken to court in order to make animals’ lives better.

Do you love food as much as we do? If so, you’d probably make a great vegan chef. You could whip up delicious meals and save animals at the same time by creating yummy, cruelty-free dishes lots of folks would love.

In the U.S. alone, almost 108 billion animals are killed for food each year. Just imagine how many people you could inspire to go vegan with delicious, animal-free cooking. The power is in your hands (and pans!). And there’s no reason to wait until you’re a grown-up to start making vegan foods. Some compassionate kids have even built their own company by making vegan food—like Shi Lachef and the three sisters who created Bourne Brilliant.

Because breeders and puppy mills are constantly adding more animals to the world when already there aren’t enough good homes for them all, millions of animals end up in shelters every year. Animal shelters are always in need of help. Whether you walk dogs or feed cats, by working at an animal shelter, you’d be giving animals in need the care that they deserve and helping them find loving homes.

It’s important that CGI be used in films about animals, because real animals should NEVER be used in movies or TV shows. Animals used in these industries are usually taken from their mothers as babies and then beaten, whipped, and yelled at in order to force them to learn tricks and perform in front of the camera. Then, when they’re no longer useful to the industry, they’re often sent to roadside zoos where they live in miserable conditions for the rest of their lives. CGI artists are paving the way to a more humane Hollywood.

When animals are rescued from places like factory farms, roadside zoos, and racetracks, they rely on animal sanctuaries to take them in and care for them. At true sanctuaries, animals receive food, love, veterinary care, space to roam, and everything else they need to live happy, more natural lives.

If it weren’t for these safe places, many animals would be left with nowhere to turn. Be a hero for animals when you grow up by working at a sanctuary for those in need of a comfortable, loving home.

Believe it or not, you could help animals and fulfill your dreams of becoming a star at the same time! Many of today’s most popular performers choose to speak up for animals.

Noah Cyrus has urged her fans to cut out dissection at their schools and has let folks know that they should NEVER go to SeaWorld. Just Add Magic star Aubrey Miller shows her fans just how easy it is to eat vegan—no matter where you are. And Mckenna Grace and her BFF August Maturo both advocate for animals as well.

Wild animals used for entertainment, like big cats, bears, and primates, are torn away from their mothers shortly after birth and usually abused by trainers. As a performer, you could stand up for animals by never supporting films or TV shows that use animal “actors” and encouraging your fans to do the same.

In circuses, elephants are often chained for most of the day, and big cats are forced to live in small cages. You could become a circus entertainer and choose to perform only in circuses that don’t use animals.

Want to help save humans and other animals? Then being a doctor might be your calling in life. No U.S. medical school uses animals to train medical students, and people enrolling in medical school don’t need experience with animal dissection and experimentation. So if you become a doctor, you could support modern medical research that doesn’t use animals.

Plus, as a doctor, you could encourage your patients to eat healthy vegan foods, which help prevent many diseases and save animals, too!

As a teacher, you’d have the opportunity to teach kids how important it is to show compassion for animals. Ms. Suiter, for example, teaches college students in South Carolina that dissecting animals is cruel. Instead, she uses high-tech computer programs and models.

Having “classroom pets” supports breeders and the cruel pet trade. You could teach students and fellow teachers about compassion by explaining to them why it’s not nice to keep animals in the classroom and by never having a “classroom pet.”

As a compassionate teacher, you’d never take fieldtrips to places that hold animals in tanks or cages, like SeaWorld or zoos. Instead, you could take your students to local animal shelters, museums, or nature parks.

Do you love wearing goggles and a lab coat and doing experiments? If so, being a scientist could be perfect for you. As a scientist, you could show people how easy it is to be kind to animals—by creating and using humane, non-animal research tools.

Every year, millions of animals—including mice, rats, frogs, dogs, cats, rabbits, hamsters, guinea pigs, monkeys, fish, and birds—are locked inside cages in U.S. laboratories for experiments and product tests. You could be a researcher and a friend to animals by speaking out against animal testing and choosing modern, animal-friendly methods for your experiments when you grow up.

As an author, you’d have the chance to spread the animal rights message to many people through your writing. For example, the author of Hey, Little Ant decided to create a book that would get kids (and their parents) to stop and think about insects, who may be small but still want to be treated with respect and kindness—and definitely don’t want to be squashed or stepped on!

Ruby Roth, author of That’s Why We Don’t Eat Animals, also uses her books to teach kids compassion for animals. You, too, could write books that teach people about different animal rights issues when you’re older.

You can be almost anything you want to be when you grow up and still help animals. No matter what you love to do, there will always be a way for you to show ♥ to those in need.